On March 13, the MCCI hosted an extended meeting of the MCCI Committee

On March 13, the MCCI hosted an extended meeting of the MCCI Committee on the Sustainable Development of the Real Sector of the Economy and Investment Activities on the topic: "Financial Innovation and Transfer of High Technologies in the Eurasian Economic Union (EAEC)". 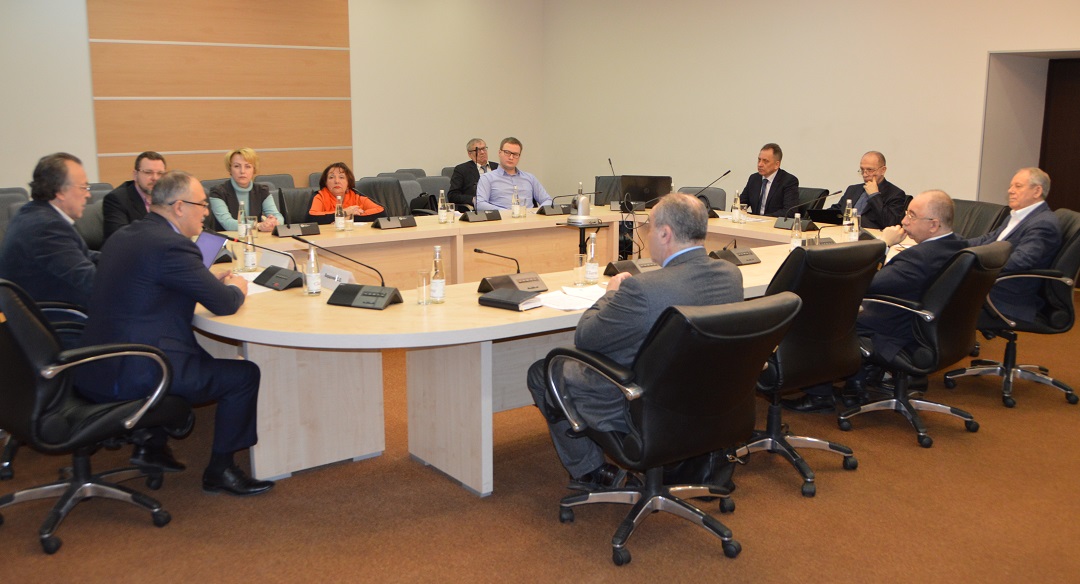 The issues of creating regional mechanisms for interaction between science, industry, banking and insurance organizations, educational institutions, business and civil society associations were discussed at the event in order to increase the efficiency of financing projects and the demand for high technologies of Moscow in the programs of the EAEC, as well as issues of promoting innovative products Moscow enterprises on the internal and external liquid markets of Europe and Asia.
The chairman of the Committee of the Moscow Chamber of Commerce and Industry, Oleg A. Chernyshev, presented the report on financial innovations and high-tech transfer in the EAPS.
He informed the meeting that the Russian Federation had assumed the chairmanship of the Eurasian Economic Union on January 1, 2018:

Higher Eurasian Economic Council
Eurasian Intergovernmental Council
Council of the Eurasian Economic Commission.
In his address to the heads of state of the members of the Eurasian Economic Union (EAEC), the President of the Russian Federation, V.V. Putin noted that for 3 years of existence the Union has proved its consistency and effectiveness.
The President of the Russian Federation also noted in his address the need to speed up the realization of the common "digital agenda" of the Union. V.V. Putin focused on the development of the "Internet economy", the formation of common rules for digital commerce, common standards for the exchange of information and its protection. The appeal notes the need to introduce high technologies in public administration, industry, customs regulation systems, and other areas. Launch joint competitive, innovative and science-intensive production.
V.V. Putin called for more active involvement of business circles in integration initiatives - big business and, most importantly, representatives of small and medium-sized businesses. He called for more effective use of the resources of the Eurasian Development Bank and the Eurasian Stabilization and Development Fund for financing interstate projects with a strong integration effect.
The President of the Russian Federation noted the importance of continuing the policy of convergence of the monetary, financial and monetary policies of the EEA member states and the creation in the future of a single financial market.
Chairman of the Supreme Eurasian Economic Council Putin noted that Russia stands for the consistent strengthening of the supranational potential of the Union, in particular, for the expansion of the competence of the Eurasian Economic Commission (ECE) in this context.
Currently, the Eurasian Economic Commission (ECE), together with the Financial and Banking Association of Euro-Asian Cooperation (FBA EAS), works within the framework of a common "digital agenda" for the development of the Internet economy, the establishment of common rules for digital commerce, common standards for information exchange and her protection.
At the same time, the FAA EAS is working on the introduction of high technologies in industry, customs regulation systems, and other areas.
These works are conducted with the connection of small and medium-sized businesses. To this end, the FBA EAS signed a Memorandum of Cooperation with the MCCI.
On March 2, 2018, at the annual meeting of the FBA EAC, the Concept for the Establishment of the Center for Financial Innovation and Transfer of High Technologies was approved. The concept was developed in connection with the urgency of the issue of the production of new types of demanded products and the need for import substitution. This concept clearly articulates the requirements for the infrastructure, which allows you to effectively implement the goals and objectives identified in this Concept. The Concept clearly defines the role of professional representatives of small and medium-sized businesses.
The signed Memorandum of Cooperation between the MCCI and the FBA EAS allows the members of the MCCI to create a mirror infrastructure and specific requirements for the organization of works that allow to establish effective interaction of the business environment of the MCCI with partners and investors of the EEMP, SCO, BRICS and EU.
In connection with the forthcoming large-scale work with the FAA EAS of a high level of organization and competencies, the members of the MCCI Committee:

International Engineering Academy (MIA),
Association "Russian House of International Scientific and Technical Cooperation" (RD ISTC),
LLC "Agency for Sustainable Development and Investments" (LLC "AURI"),
ZAO Russian Appraisal,
LLC "Chini Town Rus",
Group of companies "GeoAllianceStroy"
have developed a Plan to create an International Science and Technology Platform on the basis of the MIA with a view to organizing constructive interaction with the development institutions of the Eurasian Economic Union and the alliances of the SCO, BRICS and the EU.
The implementation of the Plan for the establishment of an International Science and Technology Platform based on MIA will additionally consolidate the intellectual